Like everyone else, I’m fed up with Comcast again. In the latest insult, my bill has gone up 35% without notice, and the CSR tells me I’m stupid for not anticipating it. 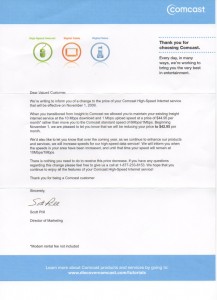 So I called Comcast. Amy, one of the most unhelpful CSRs I’ve ever spoken with, insisted over and over that I had signed up with a promotional rate in November, that the promotion was now ending, and that Comcast had been clear and upfront about the price all along.

Well, Amy, you’re wrong. That letter clearly states “we will be reducing your price to $42.95 per month”. Amy tells me that I’m an idiot. The letter didn’t explicitly state that this was a permanent rate, so I should have known that it was a temporary, 6-month promotion (Amy, apparently, has incredible psychic powers not available to mere mortals like me). And I should be happy, anyway, because $57.95 is a great, competitive rate for the service I’m getting.

Thanks for lying to me Comcast. Thanks for insulting me. And thanks for buying out a company with better CSRs and replacing them with Amy.

Anyone at Comcast want to fix this?

3 thoughts on “Comcast Is Up to Its Lying Ways Again”